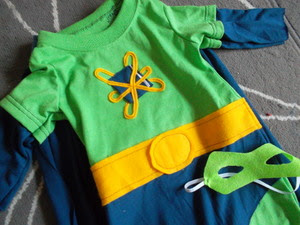 There was a great party.
A dress up party you say?
For how can a kid resist being a superhero for a day?
And Mommy not resist making her little guy into more of a cutie pie? 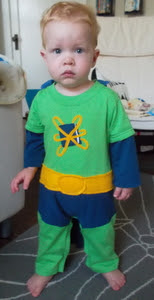 Nathan getting ready for the party dressed as “Super Why” from the PBS kids show. It was Daddy’s idea to chose this superhero (and I liked it too!). My friend Gina sent me something similar to THIS inspiration, which caused me to create this costume (romper style) from an adult’s XL tshirt (on sale at Michael’s for $2.00). In my fabric stash I already had the blue knit, the yellow felt, and the velcro for closures on the legs. It took me some labor of course, but only cost me $2.00!

He didn’t even seem to mind the cape…. for awhile, at least. 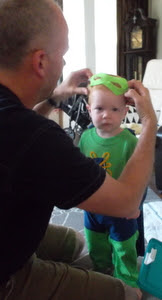 Now the mask was another story altogether. 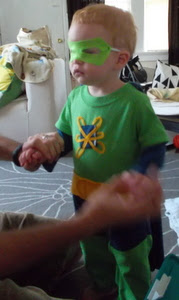 The 10 seconds he had it on were glorious, okay, tolerated by him. 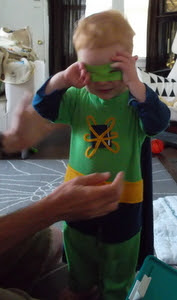 And then we went to Jordan’s superhero birthday bash!

At least I think this was Jordan in his Batman ensemble. 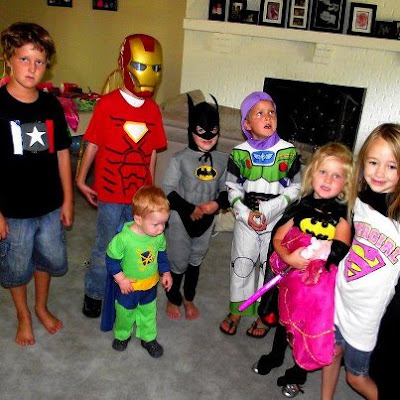 All these wonderful cousins together! The next generation of superheros! 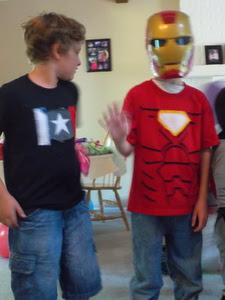 My “older” nephews weren’t as excited to dress up this year for the party, but the week before I took them to Michael’s with me and I think I coaxed them into going in costume too. Ben wasn’t too hard to persuade, as he already had an iron man helmet from a recent birthday present. Peter, on the other hand, well….it took me a few hours (or was it days?) to talk that big 10 year old into joining the party! 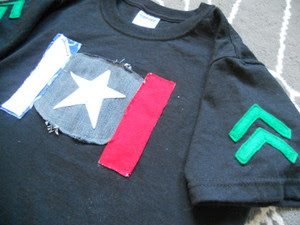 But, I’m glad he finally did. I think the only reason he gave in was because I told him he could design his own superhero logo and I would make him the shirt. It was a joy to do so too! And what else is a creative Aunt for anyways?!!!! Here is how I interpreted Peter’s design….American Hero
Sergeant, or something like that. The jean circle under the star I cut out of a pair of his Dad’s old jeans. Cool, huh? I wanted Peter’s design to have a hip (as I know it to be) and somewhat vintage looking design. And I wanted him to want to wear the shirt again sometime. Ha. ha. 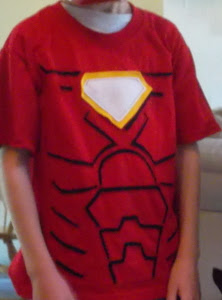 Ben went as Ironman (the triangle is from Ironman 2). For his shirt I cut out a reserve black t-shirt I had and sewed it into the inside lining of this store bought red shirt. I then chalked & sewed the “chest design” pattern onto the tshirt, and cut out all the black shown areas. The triangles are cut from felt and sewn on too. Simple (well not to make, but design wise). Washable. Wearable. Another joy to make for my wonderful nephew. 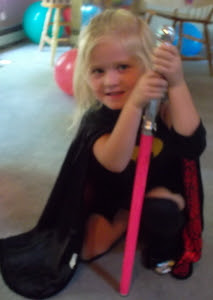 The two littles (aka my younger nephew and niece) still fit into their costumes, so no need (yet) to spoil them as well with Aunt-Joy-made costumes. Lilly came as a very cute batgirl, and I’m not sure really who Henry came as, but I know he ended up being a very handsome Buzz Lightyear, Batman, and Spiderman! I hope Nathan enjoys dressing up as much as his cousins do! 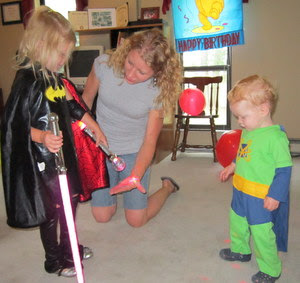 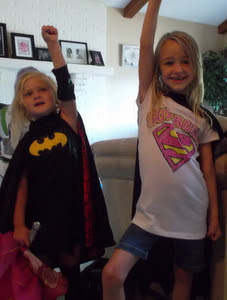 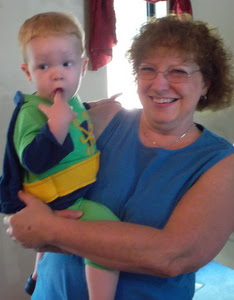 I love this picture of my Mom holding Nathan. It just captures all of the joy she has in her heart! And she was right there waiting & excited to hold all the little superheros that came to the party that evening!
Happy 5th Birthday, Jordan! Thank you for sharing all the fun, and your costumes with us!!!!
And your bouncy house was quite fun too!